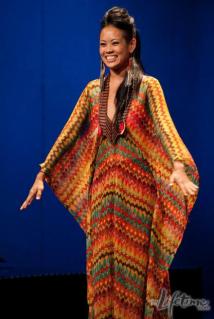 Final score:
Inspiration: 1
Perspiration: 0
The fact that Anya won Project Runway is really revealing, right?
First, Tim Gunn went to visit her in Trinidad to check on her progress and her progress was exactly, well, zero. (Except, possibly, a typewriter filled with the words: “All work and no play makes Anya a dull girl” over and over again.)
Tim was so flummoxed by this that he went back to New York and blabbed to Heidi Klum about it:
“Girlfriend, I went into her studio and there was just an empty rack where her collection was supposed to be.”
“Shut the haustür!”
Then she showed her three piece collection—supposedly the apex of her work, mind you— and only one of the three pieces wowed the judges, so she simply junked the other two.
Then she went to Mood with the Tim Gunn bonus $500 and utilized the finely honed strategy of: “Whatever pops out at me, I buy.”
Then she essentially turned her Tim Gunn consultation into a concession speech (“Between you and I , I had a very rewarding experience but I know it’s not my best work. . .”)
Then she created several new looks in 2 days and was literally sewing her grand finale dress on her model moments before Lincoln Center, much to Joshua’s continued dismay.
And then she. . .well, God damn it if she didn’t win Project Runway.
Oh and p.s.  . . she also won Fan Favorite, which I easily could’ve overlooked, since Lifetime chose to announce this major development in a tiny crawl that ran under the show. (I’ve trained myself to not read the Lifetime crawl, since they usually say things like “Coming Up Next: Army Wives!”)
How do you explain it? Especially when Joshua, Kimberly, and especially Viktor worked so hard, put in so much effort, planned so far ahead?
Bottom line: Life is unfair.
Anya may have had the least experience, she may have put in the least sweat equity, she may have the weakest construction skills, but she has that unmistakable thing called “It”—and so she wins (at life).
Because not only was her line gorgeous—it was. (That first dress was staggering, to borrow a Gunn-ism.) But the judges were right: She created a fantasy. I want to be that easy, breezy, Caribbean girl who wears flowy print dresses and walks barefoot in the sand whilst eating coconuts with my hottie fisherman boyfriend and listening to a steel drum band.
Or, as I put in my notes: “I so want to lose 20 pounds, 2 bra sizes, and live in Anya’s clothes!” 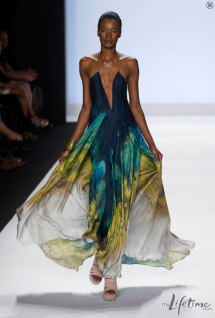 Okay, since I’ve devoted half this blog to wonders of Anya, let’s go over the other designers, huh?
We’ll start with Viktor. I’m glad he went out with at least one Sassy Catch Phrase That Will Never Catch On ™:

Followed shortly by another Sassy Catch Phrase That Got Screwed Up Midway So He Just Kinda Went With It ™:
“You gotta grab the handles right now. You gotta stir the . . . motorcycle!”
But I give the lad tons of credit for scrapping that créped, tiered grey dress that the judges (and I) loved—“It was too messy,” he said—in favor of some quilted black pants and a black top.
Viktor has an almost preternatural confidence in his own abilities. The man has balls. (Sorry, Anthony Ryan.) It will serve him well going forward.
As for his collection? I actually thought it was stunning, even the see-through looks that the judges were so meh on.
(Transparency, apparently, is a good thing in government, but not so much on the runway.)
If it were up to me, Viktor and Anya would’ve been last two standing, but it wasn’t up to me, now was it?
Next Kimberly.
I give the girl mad props for sticking to her Gunn(s) on the roped earrings and bracelets. That was a huge inspiration for her work and I personally liked them. However, her collection, which Michael Kors said was all about “exuberance, glamour and kickass attitude,” just didn’t move me. (He also said that her black shimmery gown was “killer diller.” I sooo want that phrase to make a comeback.)
That shiny, clingy sky blue dress? Just no. That generic tank top and cargo pants look with the “surprise! I’m a slut!” backless component? Wrong again.
I did, however, really love her bow-tied ivory top and high-waisted pant combo and, like Heidi, would liked to have seen more in that direction.
Finally,  Joshua:
Good lord people, those lime green shorts with the draw strings and the camel toe had no alibi. Seriously. . . I can’t even. . . (Nina claimed that she didn’t like them on the runway, but upon further reflection decided they were very editorial. Go with your gut, Nina.)
But I do kinda sorta get Joshua’s collection. It’s tackiness elevated to art.  . . or art filtered through tackiness or. . .something like that.
And I love how darling and conservative his father is. (He’s just got to be an orthodontist, right?) Puts Josh in perspective. Also, still hoping to see “Sibling Revelry” in production by this summer.
Here’s a few final thoughts on the show in general:
I almost felt sorry for Anthony Ryan, sittin’ there, minding his own business, thinking he had this “Fan Favorite” thing wrapped up. Sorry Anthony Ryan—left dangling again.
Corinne Bailey Rae in the house! Corinne Bailey Rae in the house! Squee! (“Put Your Records On” is one of my all-time favorite songs and I don’t care who knows it.)
But what the hell was Thomas Jane doing there? Seriously. Anyone. . .?
As long as cameras are involved, Jennifer Love Hewitt would go to the opening of a zipper.
“Although I don’t like his personality, I like Josh’s collection.” –Don’t change, Jay McCarroll, don’t change.
I’ve decided that Tim Gunn’s tendency to turn everything into a breathless collective question—How thrilled are you? How gorgeous was that? How excited are the 5 of us right now?—is his own version of Yoda’s inverted-subject speak. And I love it.
And, there you have it, folks. . .another season of Project Runway in the books.
Congrats to Anya for . . . getting to be Anya.
And thanks to all of you, for sticking with my blog all season. We made fun of the fug, we secretly loved Josh, we girl-crushed hard on Anya, we ugly cried, it became a part of us.  . .
Tune in next week when I start blogging the new season of Top Chef!

4 thoughts on “It Girl Happens: The Project Runway Finale recap”