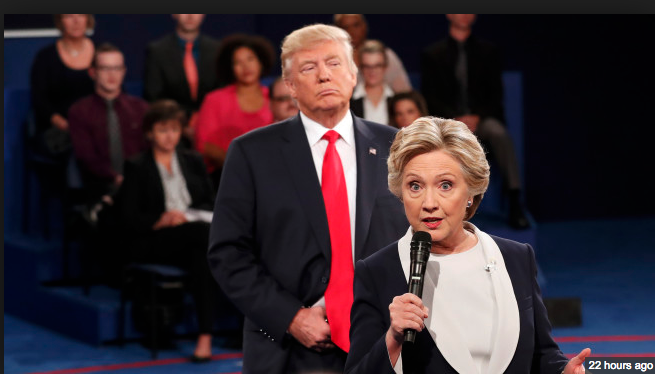 There’s a famous saying, “Well-behaved women seldom make history.” This is both empirically true and a sentiment I can fully get behind. However, the Hillary Clinton candidacy might be the exception that proves the rule.

Take the debate on Sunday night: Trump was rude. He was taunting. He made threats, he loomed ominously, he called his opponent unspeakable names. And throughout it all, Hillary Clinton kept her decorum. She smiled, perhaps through gritted teeth. She waited for her turn to speak. She quoted Michelle Obama’s now famous “when they go low, we go high.” Not once, but twice she evoked the idea that “America is great because America is good.” She was, in short, well behaved.

Then there’s us, her devoted followers. We, too, have been largely well-behaved. We haven’t worn vulgar tee-shirts or buttons, or chanted gleefully for the incarceration of our rival. We haven’t thrown dollar bills at a motorcade or chairs at a stage. We haven’t bullied or harassed on line. We haven’t roughly thrown protesters out of rallies. Instead, we’ve done the opposite—retreated politely to the sidelines. This is one of the many reasons there is a perceived “enthusiasm gap.” This is on us. But please don’t mistake our politeness for a lack of enthusiasm.

It started, of course, in the primaries. Bernie supporters were not just zealous, they seemed to have an unlimited supply of time on their hands. Some of the young men—the anti-Hillary, pro-Bernie Subreddit crowd—were, in fact, abusive. Most were just relentless. They came out of the woodwork. If you dared to post a pro-Hillary meme on Twitter or Facebook, they always managed to find you. They wanted to argue, they wanted to debate. They never accepted that last refuge of the polite person: “Let’s agree to disagree.” They wanted to CONVERT you. Who the hell had time for these Facebook threads that went on for pages, these fights that went on for hours? Yes, some of us retreated to the sidelines because we were being harassed. But many did so because we had freaking LIVES TO LIVE.

So we found refuge in private Facebook groups, safe spaces, where we cheered on Hillary, shared memes both positive and negative, gushed about Hillary’s outfits (and then chided each other for focusing on the superficial), vented about misogyny and injustice, and, every once in while, proudly shared a public moment where we engaged with our detractors, didn’t back down, chose to roar. (“Represent!” and “You go, girl!” came the inevitable replies.) There were many reasons why we didn’t go public—some of the older supporters, Hillary’s age and older, really did come from a generation where decorum and civility were valued highly; others had family and work and busy schedules to juggle and simply didn’t have time for this shit; a few of us felt triggered or abused by the vitriol that was often hurled our way—but we followed our chosen candidate closely, with pride and admiration, fretfulness (because Hillary supporters are nothing if not an anxious lot), and love.

There really isn’t an enthusiasm gap, but there is a volume gap. We may not be that loud or rude. We may be the last gasp of the well-behaved women. And this is a good thing. Women should be loud, we should demand things, make our voices heard, take up public space. But right about now, in this obnoxious political climate where an orange-faced vulgarian is leading the Republican party and the ugliest side of America’s id has been unleashed, good behavior feels like a kind of grace. It feels like a benediction. And as of today, it feels like victory.