Does Donald Trump have a single redeeming quality? I’m not kidding here. I actually gave this some serious thought recently and came up empty. His many negative qualities are manifest—Google “text book definition of sociopath” and it will look like his Match.com profile—but even the qualities his followers consider good (strength, straight-forwardness, etc.) are not all they seem.

So, without further ado, I thought I’d list Trump’s obviously unsavory qualities and then briefly challenge the ones people consider positive.

He’s a bully.
Whether he’s name-calling (“Miss Piggy,” “Crooked Hillary,” “Lyin’ Ted”), mocking the disabled, mocking his opponents, threatening to ruin people with law suits, or looming behind his competitor during the debate, he tries to make himself seem tough by intimidating and belittling others.

He’s thin-skinned.
The phrase “can dish it out but can’t take it” was made for this guy. He hurls all sorts of insults at people, but the moment you dare to challenge him, he goes nuclear. This is why he spent a week going after Miss Universe Alicia Machado when his advisers begged him to drop it, why he insists on bashing any newspaper or TV show that dares to criticize him, why he calls Elizabeth Warren “Pocahontas,” why he bragged about the size of his penis in the middle of a debate (bet you’d forgotten about that presidential moment, eh?), and why, yes, he attacked a Gold Star family after the DNC. The guy is so easily provoked, it’s terrifying. (“Itchy trigger finger” is not a quality once looks for in a president). Need proof? Check out this damning spread of Trump’s insults in the New York Times.

He’s not generous.
A months-long investigation by The Washington Post‘s David Fahrenthold shows how he never contributes a cent of his own money to charity, and, in fact, uses his foundation to advance his own business ventures.

He’s a bald-faced liar.
He lies so frequently, and so boldly, all the lies begin to feel like some alternate version of truth. First he brags that he has a relationship with Vladamir Putin, then he claims he never met the guy. He denies saying that Climate Change is a hoax, even when his tweets stating just that have not been deleted. He lies about his taxes. He lies about being the leader of the Birtherism movement. He lies about his charitable giving. (See above) He lies about his stance on the Iraq War. He lies about seeing American Muslims celebrate 9/11. He lies, absurdly, about Hillary’s immigration policy. And so on…

He’s a racist.
He claims, with classic hyperbole, that he’s the “least racist person you’ll ever meet,” but, in fact, he is demonstrably racist, from putting out a full-page ad in the Daily News calling for the execution of the Central Park Five, to RTing racist and demonstrably false memes about crime stats, to calling Mexican immigrants “rapists” and drug dealers, to questioning the integrity of a judge because he’s Mexican, to saying that “I think Islam hates us,” to his famous policy of putting a small “c” for “colored” on the applications of African-Americans who wanted to rent one of his properties.

He’s a misogynist.
Even before the now infamous “grab them by the pussy” incident and even before 12 women came forward accusing him of sexual assault, we knew the guy was a misogynist. There’s so much proof, I have neither the time nor the stomach to list it all here, but suffice it to say, “Blood coming out of her whatever,” RTing an insult to the appearance of Ted Cruz’s wife, his “look at that face!” remark about Carly Fiorina, his absurd ongoing feud with Rosie O’Donnell, and his many interviews with Howard Stern where he ranked women’s breasts and physical appearance, were proof enough. Since the accusations came forward, he has merely doubled down on his piggishness, noting that the women weren’t hot enough for him to assault and, finally, depressingly, saying that he was “unimpressed” with what he saw when he loomed behind Secretary Clinton. (It was just a matter of time before he sexually objectified her, wasn’t it?)

He’s boastful.
I mean, do I even have to elaborate? 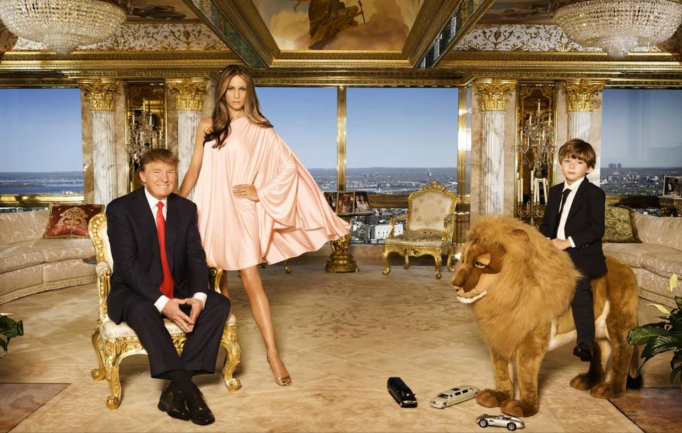 He never admits to being wrong or apologizes.

Did I mention he’s a sociopath?
On 9/11, he boasted that he now had the tallest building in Lower Manhattan. Scum. Of. The. Earth.

He disrespects his constituents.
This is the one that galls me. There was, of course, the famous “I could stand in the middle of Fifth Avenue and shoot somebody, okay, and I wouldn’t lose any voters” crack. But more than that, there’s the taxes. Here’s the thing on Trump’s taxes: Everyone knows he’s lying. This excuse about the audit? Total bullshit debunked by numerous tax experts. He’s withholding his taxes because there’s something damning in them—ties to Russia; a total lack of charitable giving; the likely fact that he’s not really a billionaire—he doesn’t want his voters to see. He’s obviously and intentionally deceiving them—calling them morons, essentially—and they don’t seem to care.

Okay, I could go on (and on), but let’s get to the qualities that Trump fans seem to like about him.

He’s strong.
You see, here’s where we disagree. Bullying is the opposite of strength. It’s overcompensating for feelings of weakness and insecurity. People who have high self-esteem and truly feel strong do not need to belittle others. Do you see the similarly boastful and bullying Kim Jong Un (who just endorsed Trump!) as strong, or as one of the most pathetic, child-like, insecure narcissists alive? Yeah, ditto.

He tells it like it is.
Actually, he’s just mean and rude. Again and again, it has been proven that, far from telling it like it is, he’s the biggest liar in the history of politics.

He’ll keep us safe.
How? By cozying up to Putin? By torturing people? By bombing the shit of places he couldn’t identify on a map? I don’t trust a man who thinks more countries should have nuclear weapons, who didn’t even realize that Russia was ALREADY in Ukraine, and who wants to start a war over rude hand gestures to keep us safe.

He loves his kids.
Okay, I’ll give you that. He seems to love his kids, although he had very little to do with raising them. I might argue that loving your children is the bare minimum qualification for being human.

So there you have it. On Tuesday, we run the risk of putting not just the worst presidential candidate ever but literally one of the most disgusting human beings alive in the Oval Office. Vote wisely, America.