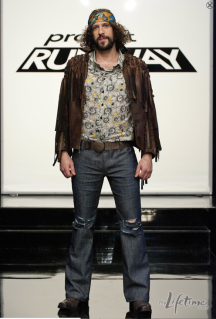 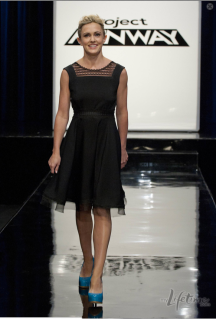 And then something rather extraordinary happens—in fact, if I hadn’t seen it with my own eyes, I may not have believed it actually occurred.

Tim has Team Nuts & Bolts form a circle and hold hands. Yes, like the kind of thing they do on New Age retreats with drum circles and bonfires and group chanting . Or, if you prefer Anthony’s interpretation, he’s making the poor bastards pray together.
My new answer to “How Bad Was It?”
“It was Tim Gunn Prayer Circle Bad.”
Meanwhile, and needless to say, Team Chaos is positively thriving. Tim Gunn loves everything they’re doing and wants to marry their entire collection. (Except for Bryce’s, but he doesn’t count.)
They have but one snag, a sort of leitmotif running through their otherwise perfectly awesome day: Olivier refuses to make a pair of pants to go with his (expertly tailored) jacket.
One particularly humorous exchange on this subject goes like this:
Anthony: Olivier, where do you stand on the pant?
Olivier: Huh?
Anthony: The pant?
Olivier: Wha? What? The what?
Anthony (sighing): How are you coming on the pant?
Update: Olivier does eventually make a pair of pants, not that it matters because his jacket is smothered in awesome sauce and absolutely blows the judges away.
The guest judges are:
Rachel Roy (If she says “yum-o” one damn time, I will scream.) (Wait . . . I have just been informed that Rachel Roy and Rachael Ray are two different people.) (I’m pretty sure I made this same joke in a recap about five years ago. Please do not Google to confirm.)
and
Rose Byrne, who is a helluva actress (really!) but a tad useless as a Project Runway judge.
So Team Nuts & Bolts come down the runway and there is some good and some bad. It’s not a total disaster, although I remain puzzled by the length of Bert’s dress. (And hair.)
But then Team Chaos does its thing and it’s so much better, guys. I mean, it’s actually great. Every single piece (well, except for Bryce’s, but he doesn’t count) is extraordinary. And I kinda feel bad for Team Nuts & Bolts. They actually did get their shit together, but they just got outclassed.
Sooooo. . .
Team Chaos gets their tongue-bath from the judges and then it’s time for Team Nuts & Bolts to skulk back on stage and take their medicine.
Michael Kors makes a bunch of jokes at their expense: “Time’s a tickin’ when you’re wearing that dress!” and “Not a lot of women want to have the word cancelled on their crotch!” and “Your video looks like a hooker convention coming home after a long night!”—and then Heidi asks the team members to choose the weakest link.
Becky picks Josh. “He started us off badly. It almost collapsed us in a way.”
Bert also picks Josh, so apparently that hug/prayer circle/bromance didn’t stick.
Laura says Bert, because she prefers to surround herself with shiny,  new things.
Josh says Becky.
And then Kimberly says Becky, too. “She’s the least styled,” Kimberly says. “She’s more of a”—and here she looks at Becky, as though expecting some help (“glorified seamstress?” she hopes Becky will offer, or “really just kind of a space filler?”—but Becky refuses to play her game). “She has more of a simple kind of style,” Kimberly finishes on her own.
Little chat time.
Michael Kors calls Josh a “Little Dictator” which makes me giggle.
They love Olivier’s jacket, Viktor’s dress (me too!), and Anya’s overall fabulousness (me three!).
They hate Basic Becky and Josh’s bad taste and bad attitude.
And the winner is: Anya!
And, as stated in paragraph one (sorry spoilerphobes): Becky Ross’ time has . . . run out.
*Apparently, this would be an inappropriate thing to say in the workplace. Please make a note of it.